Probably the best known example of a buried book is the bound collection of manuscript poems that Dante Gabriel Rossetti placed in the coffin of his late wife Lizzie Siddal. The book of poems is famous not so much for its burial, as for the fact that Rossetti decided several years later to retrieve his manuscripts, and had his wife’s coffin opened. 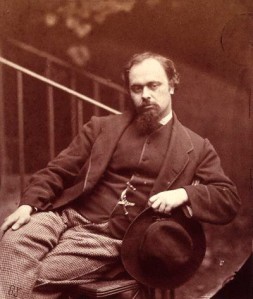 Siddal modelled for several of the pre-Raphaelite painters, most famously as Millais’ Ophelia and Rossetti’s Beata Beatrix. Siddal and Rossetti’s volatile relationship included a decade-long period of on-off engagement and infidelity (on his part), before their marriage in 1860. In February 1862, after a long period of illness and severe depression exacerbated by Rossetti’s ever variable affections, Siddal died of a laudanum overdose, possibly a deliberate suicide.

In a grief-stricken and typically melodramatic gesture Rossetti, who had been unable to take a full part in the funeral proceedings, placed two books inside the coffin: Lizzie Siddal’s bible, and his own manuscript book, telling a friend that “I have often been writing at these poems when Lizzie was ill and suffering, and I might have been attending to her, and now they shall go” (quoted in Marsh 1999: 244).

While his friend Ford Madox Brown begged him to reconsider, Rossetti’s brother William encouraged the sacrifice, regarding it as a moving and honourable act born of contrition. Rossetti reportedly placed the books inside the coffin, hiding them in Siddal’s long hair. She was buried in Highgate cemetery (Marsh 1999).

In 1868, some six years after Siddal’s burial, Rossetti’s friend and agent Charles Augustus Howell offered to arrange the retrieval of the poems from her coffin, but Rossetti declined. However in the summer of 1869, as he prepared to publish a volume of his poems, Rossetti reconsidered the offer and instructed Howell to proceed with the exhumation, but to keep it absolutely secret. The process was eased somewhat by the fact that the Home Secretary at the time, whose permission was necessary for the exhumation to take place, was a personal friend of Rossetti’s.

On 5 October 1869 Howell and a team of workmen dug up Siddal’s coffin and removed the book before reburying it and replacing the stone. Also present at the exhumation of the book was Dr Llewellyn Williams, who had been instructed to disinfect the book if necessary. While Howell wrote to Rossetti that the book was damp and damaged, the truth was a little more extreme. By the time Rossetti received the book two weeks after the exhumation he found it damp, decayed, worm eaten and stinking of disinfectant. Many of the pages were stuck together and a several of the poems including Jenny which he had most hoped to retrieve were badly damaged with only fragments remaining legible (Marsh 1999).

Part of the manuscript from the coffin

Despite Rossetti’s hopes for secrecy the story of the exhumation soon became public, and it was quite reasonably seen as an unsavoury and disreputable act that reflected badly on its initiator. In 1900 the writer Arthur Symons recounted an opinion of the actress Eleanore Duse, that “All Rossetti is in that story of his MS. buried in his wife’s coffin. He could do it, he could repent on it; but he should have gone and taken it back himself: he sent his friends.” (Symons 2004: 345)

Symons, A. 2004. Studies in Strange Souls. In H. Jones (ed.) Lives of Victorian Literary Figures II: The Brownings, the Brontës and the Rossettis by their Contemporaries. Volume 3: The Rossettis. London: Pickering and Chatto, 343-51.